Frenkie de Jong is hot. The 21-year old Dutchman is only playing his first full season in the starting line-up of Ajax, yet is already one of the stars of both club and country.

His team Ajax have been impressive in this season’s Champions League so far, being on track to progress to the round of 16. And even though his international debut was only five months ago, some already consider him unreplaceable in the national squad. Is Frenkie de Jong really the future superstar he is made out to be?

When you watch de Jong play, the first thing you notice is the calmness he keeps in all situations. He is very press-resistant and manages to somehow both barely lose the ball and make his signature dribble through pressing lines on the regular. This makes him very valuable as a play maker for Ajax and Oranje.

One way to assess this is to look at carries that progress the ball towards the goal by at least 10 metres. Out of >1200 players in the big 5 leagues + Eredivisie who played over 2000 minutes in the last two seasons, de Jong sits comfortably on top. On average, he makes more than 10 such dribbles per game, a truly unique amount for a player in his position. Even though he has played in both midfield and defence over the past two seasons, there isn’t a single defender or midfielder nearby. When looking at these numbers together with the average starting position of the dribbles, we can visualise how uncommon it is. 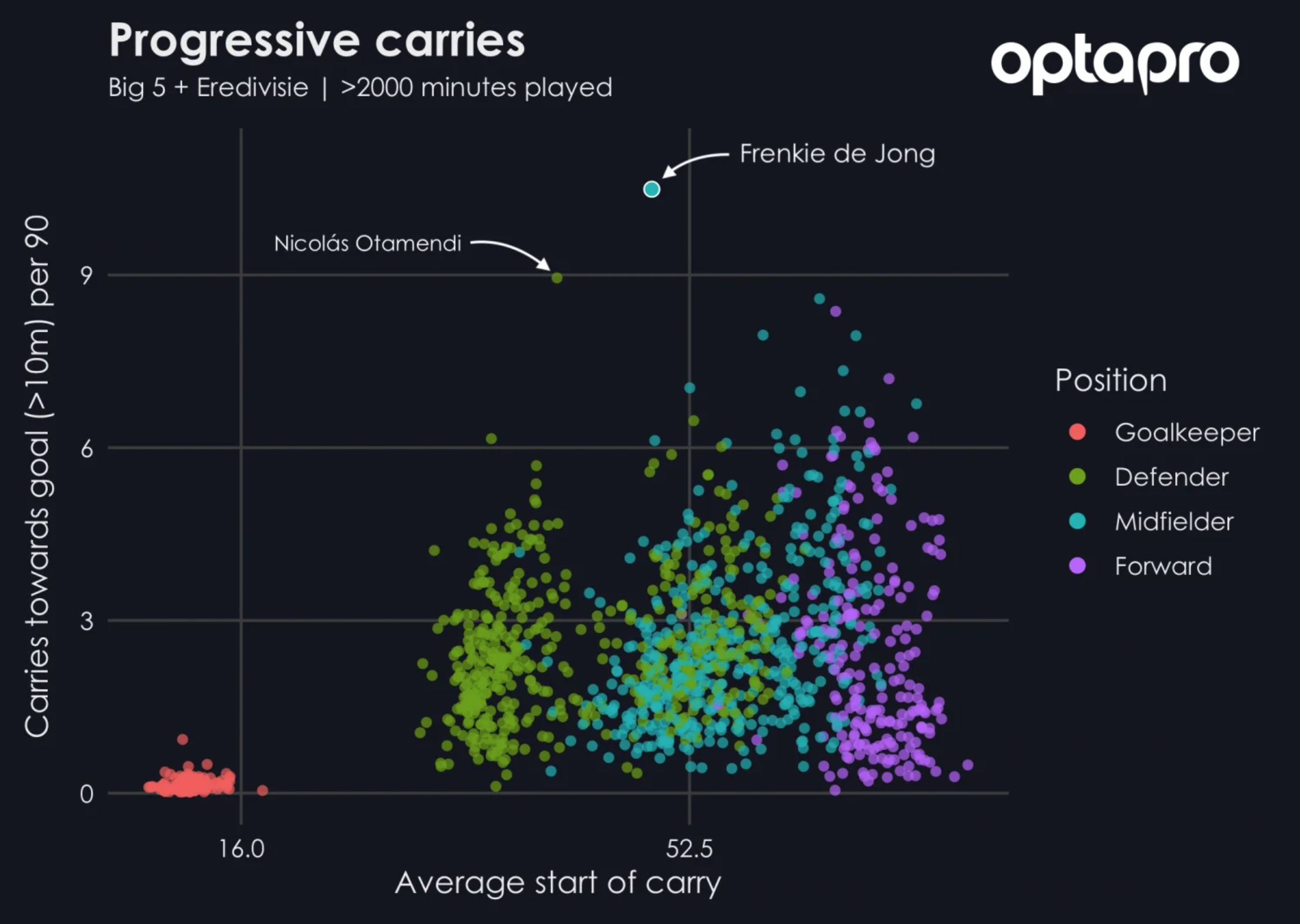 The only player who comes somewhat close is Nicolas Otamendi from Manchester City. Obviously, it’s likely easier to complete these dribbles in the Eredivisie than in the Big 5 leagues, due to the lower defensive quality of the opponents. However, the next Eredivisie player on the list clocks in at almost half de Jong’s amount.

Not only is the number of progressive dribbles impressive, even more so is his consistency in doing so. A dribble through midfield is a risky move to make, although usually high risk/high reward. In de Jong’s case, it looks more like low risk/high reward. When we look at the loss rate — how often a player loses the ball compared to how often he has the ball — we see that he only loses the ball about 9% of the time, among the lowest in the sample. 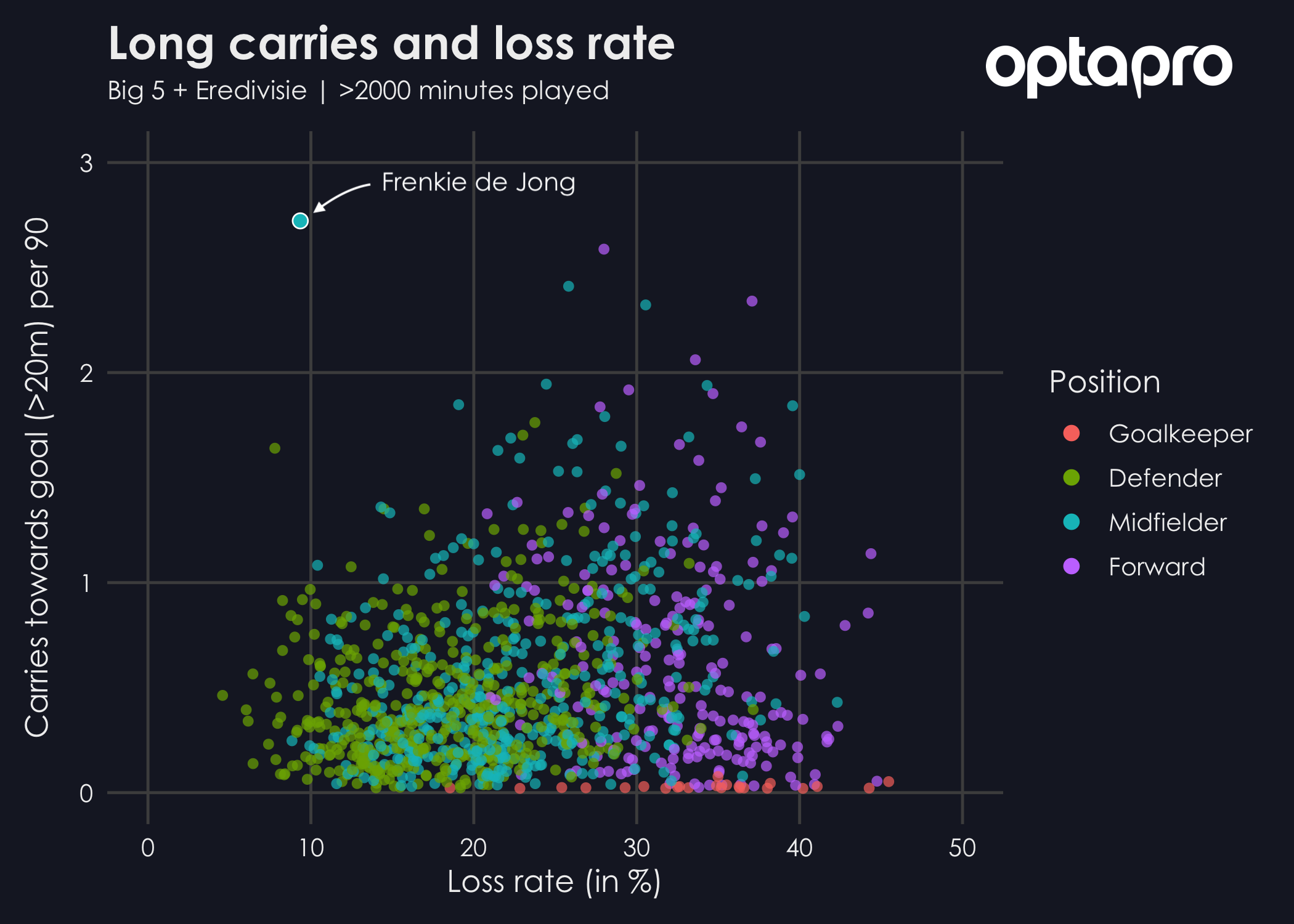 The general trend among his peers is that the more of these dribbles are attempted, the higher the loss rate tends to be. After de Jong, the next 24 players on the top of this list lose the ball at at least double the rate de Jong does. This low loss rate is partly due to not losing the ball while dribbling, and partly because his passing is very accurate. His passing accuracy comes in at 92%, among the highest over the past two seasons. He manages to stay very accurate even when in the final third, where he completes 85% of his passes, behind only Mousa Dembele, Kroos, Kante, Valero, Sergi Roberto and Draxler.

Of course there is also still room for improvement. Dribbles towards goal like the ones talked about above generally create a lot of danger. We can see this when we take a look at sequences that were under a team’s control for over five seconds. If such a possession contained a dribble towards goal of over 10 metres, it resulted in a shot 14% of the time, compared to 7% if it didn’t contain such a dribble. For Ajax, these numbers are similar. Without a dribble by de Jong, they result in a shot 11% of the time, with a dribble 15% of the time.

At the same time the quality of the resulting shots tends to be higher when a long dribble is made. However, in de Jong’s case the average xG of those sequences is actually lower than Ajax’s average.

This brings us to the main critique of de Jong: his lack of output. As a defensive midfielder it is no surprise that he is rarely involved in goals directly. However, also his involvement in sequences that lead to shots or goals isn’t very special. In the Eredivisie, he is involved in the second most sequences per match, only behind Hakim Ziyech. Still, he is behind a large part of his team mates at Ajax when it comes to involvement in sequences that end in a shot or goal.

And even though he managed to get seven assists last year, his average xA per 90 is only 0.13, which is not very high. That has materialised this year where he hasn’t been able to assist a goal yet, even though Ajax has already scored 36 goals in the Eredivisie and Champions League. One could question whether actual offensive output is something you should ask from a defensive midfielder, but for a player that gets into advanced positions often it seems only reasonable.

Also, since de Jong often plays as a the most defensively placed midfielder, there are questions about his defensive skills. Ajax usually dominate possession, so de Jong is not often put in difficult situations. Even still, his defensive output is low, considering interceptions or tackles. This might be a problem when he plays in a team with low amount of possession. For instance, while playing for the Netherlands, coach Ronald Koeman so far decides to pair him with a player who covers this work for him, like de Roon.

Even still, de Jong seems to have found a way to contribute from a defensive point of view. Even though his physique would have you think otherwise, he wins duels at a higher rate than any outfield player in the big leagues. The amount of recoveries he makes every match is also among the best. 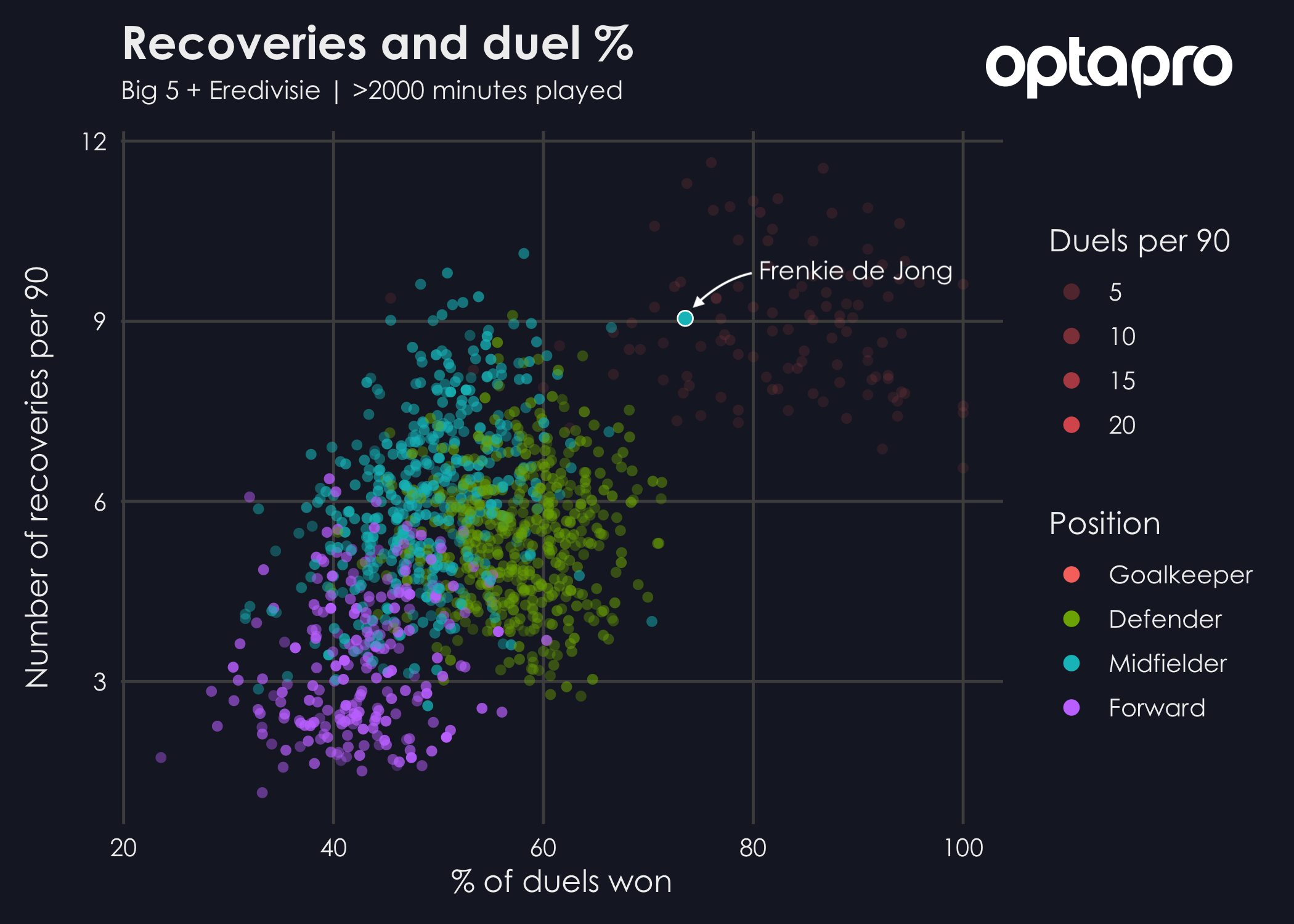 In the above graph these two skills are plotted together. The more visible the dot, the more duels the player has had per match. This adjustment is made to avoid players who are rarely caught in a duel to skew up the graphic. We see that de Jong is in a league of his own here, only surrounded by goalkeepers. In this unorthodox way, he still manages to make his mark defensively.

Frenkie de Jong is a unique player. When comparing him to his peers it becomes clear that the stats do agree with the eye test: he really is something different. He has brought much to the table in the 1.5 seasons he has played at the highest level, and will likely only keep improving. If it will bring him offensive output as well, this won’t be the last time you will hear from him.