These are the best passers at EURO 2016

About 2 months ago I introduced a new way to measure passing skill, xG added. With the Euros now in its final stages, I figured it was a nice time to see who xG added rates as the best passers.

(Disclaimer: the sample size of an international tournament is very small. Lots of players only play 3 games and opposition is different for teams in different groups. This means that one excellent game will influence your average score quite significantly.)

Let’s start with an example. Elseid Hysaj, right back for Albania and Napoli, puts his team mate in front of the keeper. The xG added of this pass is 0.352. That basically means the xG at the end location is about 0.352 higher than the xG at the start of the pass. This takes into account that the pass is a through ball, which gives the end xG a bump.

As I explained in my last blog, the metric is pretty harsh on center forwards, as they often receive the ball in advanced positions which gives them little to no options to pass forward. Apart from the strikers and goalkeepers though, players from all positions on the field can excel in xG added.

An interesting example of this is Jérôme Boateng, centre back for Germany and Bayern Münich. Ever since Pep Guardiola joined Bayern he has developed into one of the best passing centre backs in the world. The influence of Guardiola is clearly visible when you look at the xG won (positive xG added only) for Boateng before and after Guardiola arrived at Bayern in 2013/14. 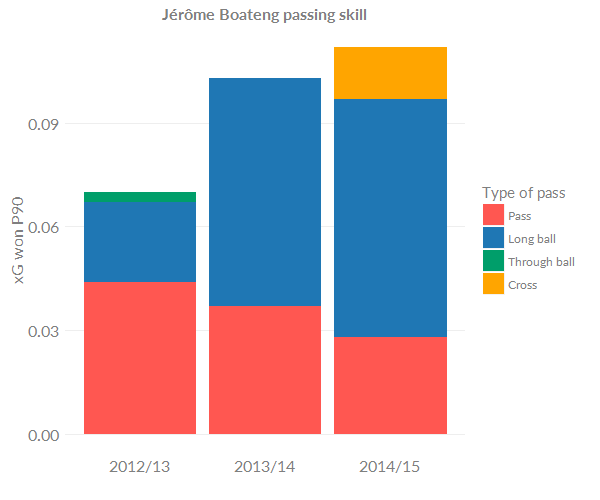 It also looks like Boateng changed his passing style into passes over longer distances. This is visible in the graph above as his xG won in passes decreased, but xG won in long balls increased. He has continued to focus on long balls during the Euros, which can be seen when we look at his passing plot. 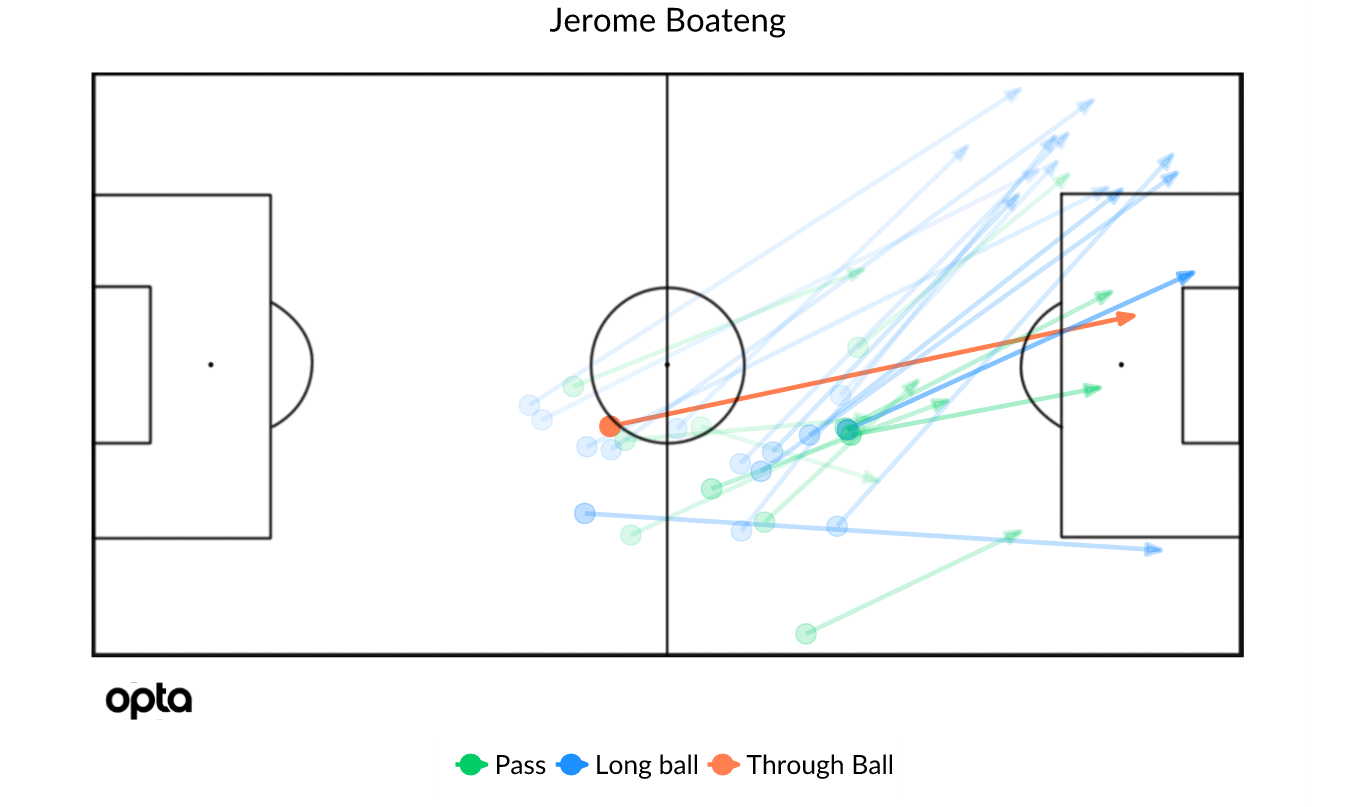 In the above plot, the 25 best passes of Boateng during the Euros are shown. The more visible lines correspond to passes with a higher xG added. The colour indicates the type of pass. Looking at this, it instantly becomes clear he really likes to pass diagonally to the left forward. He’s not a one trick pony however, as he also finds his teammates with ground passes in central positions. Boateng’s best pass according to xG added was this through ball on Özil against Northern Ireland.

Boateng has been excellent this season, which is also shown when we take a look at the best players this tournament according to xG added. All players who have played at least 2 and a half full matches, or 225 minutes, are included. I chose 225 minutes because it will still include players who were eliminated after 3 matches, even if they were substituted just before the end. The data used is from the group stage and the round of sixteen. The scores are xG added per 90 minutes. This gives the following top 10: 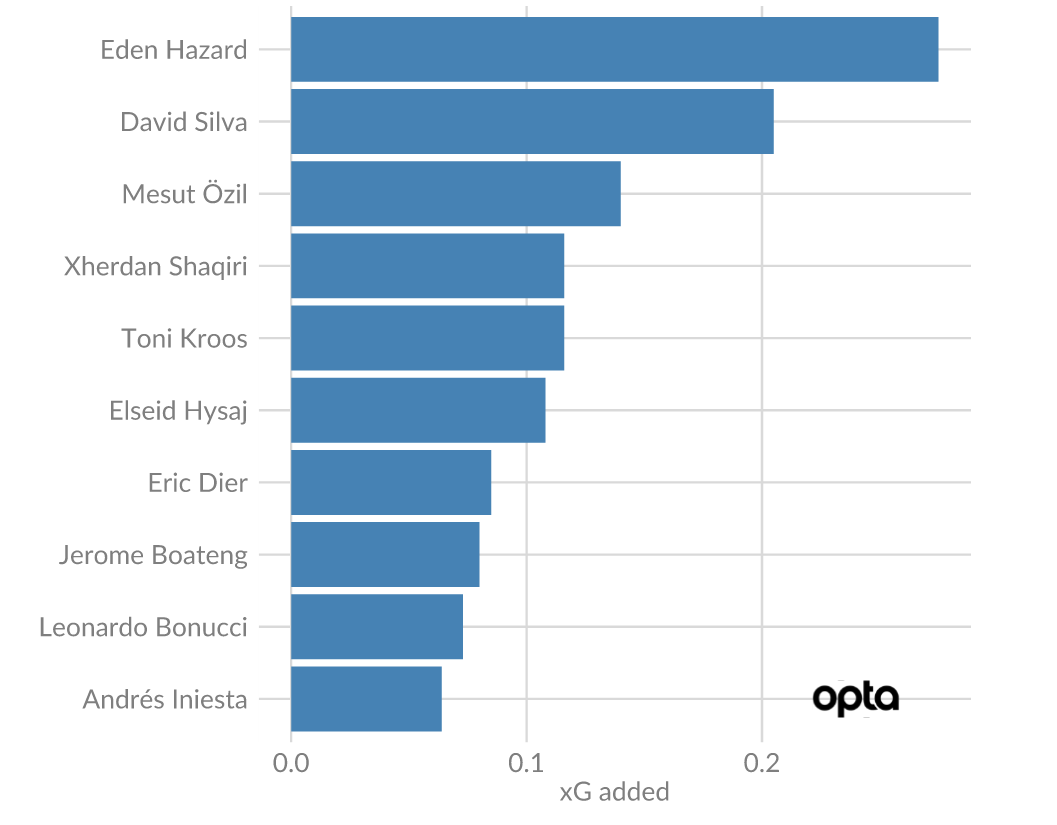 Eden Hazard is in the lead, followed by Silva and Özil. Centre backs Jérôme Boateng and Leonardo Bonucci are also included. More surprising names are Shaqiri, Dier and Hysaj (who appeared earlier in this blog). Apart from the fact that they might be lesser known than the others, they’re also the youngest players in the top 10. Shaqiri already appeared in 12th place in xG added in last year’s Premier League season, and is excelling for his country as well. Hysaj gained a lot of xG added because of the great pass I used as an example earlier in this blog. Either way, all three players look legit and will probably appear in lists like these in the future.

Another notable fact is how far Silva is ahead of team mate Iniesta. Iniesta is often praised for his passing skill but this tournament Silva out played him. Where Iniesta was on the top of his game against Czech Republic and Turkey, he was completely invisible against Croatia and Italy. This is easily shown by looking at his xG added figures for the 4 matches. 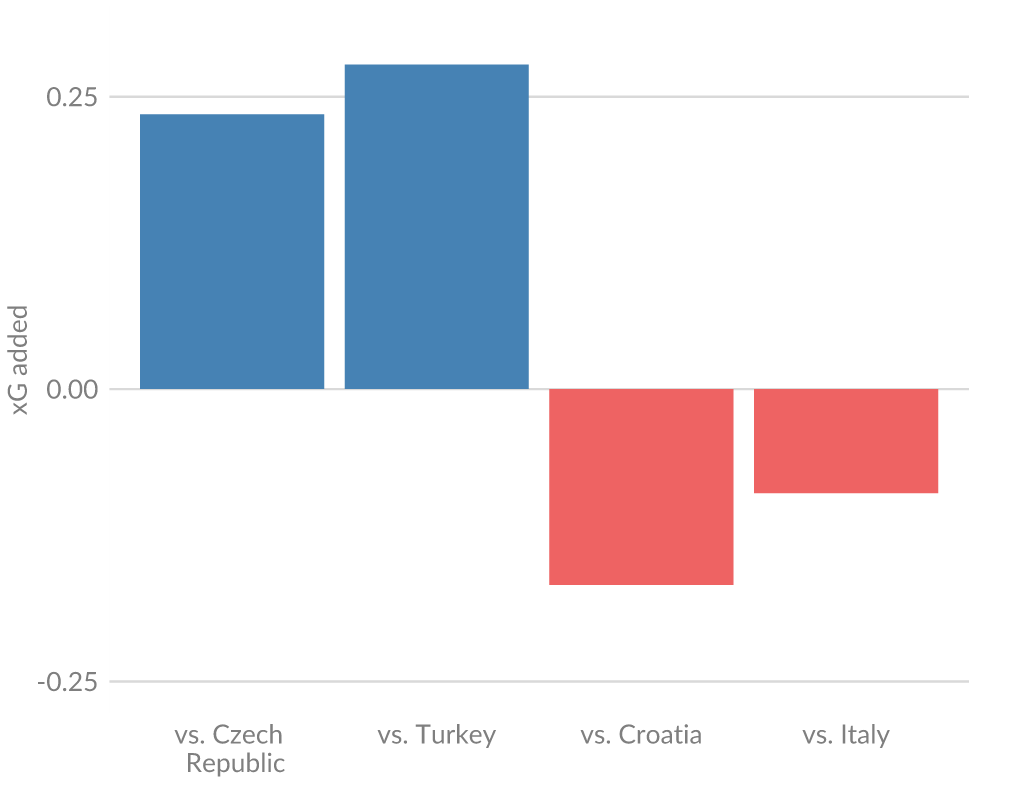 Silva’s numbers are somewhat different. He excelled against Czech Republic, where he achieved the highest single match xG added score of the tournament. He couldn’t impress afterwards though against Turkey and Italy. His game against Croatia still pretty decent though, most notably his through ball to Cesc Fabregas which caused the 1-0 was amazing. All in all he ended far above Iniesta mostly because of Iniesta’s disappointing perfomances against Croatia and Italy. His passing plot shows that he regularly found his teammates in advanced positions. 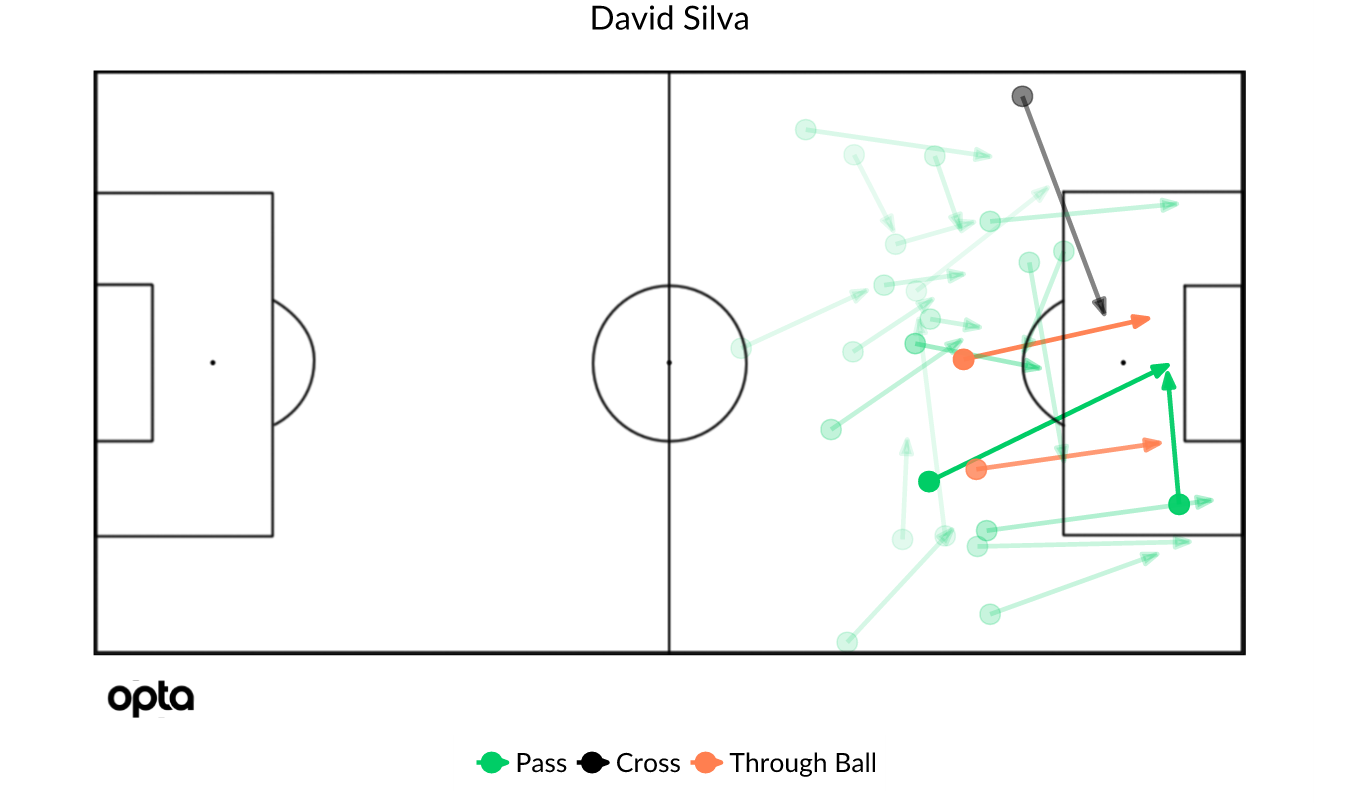 The best player according to xG won is Eden Hazard. The Belgium winger took some time to get started though. He couldn’t impress in the game against Italy, but has been growing in the tournament ever since. 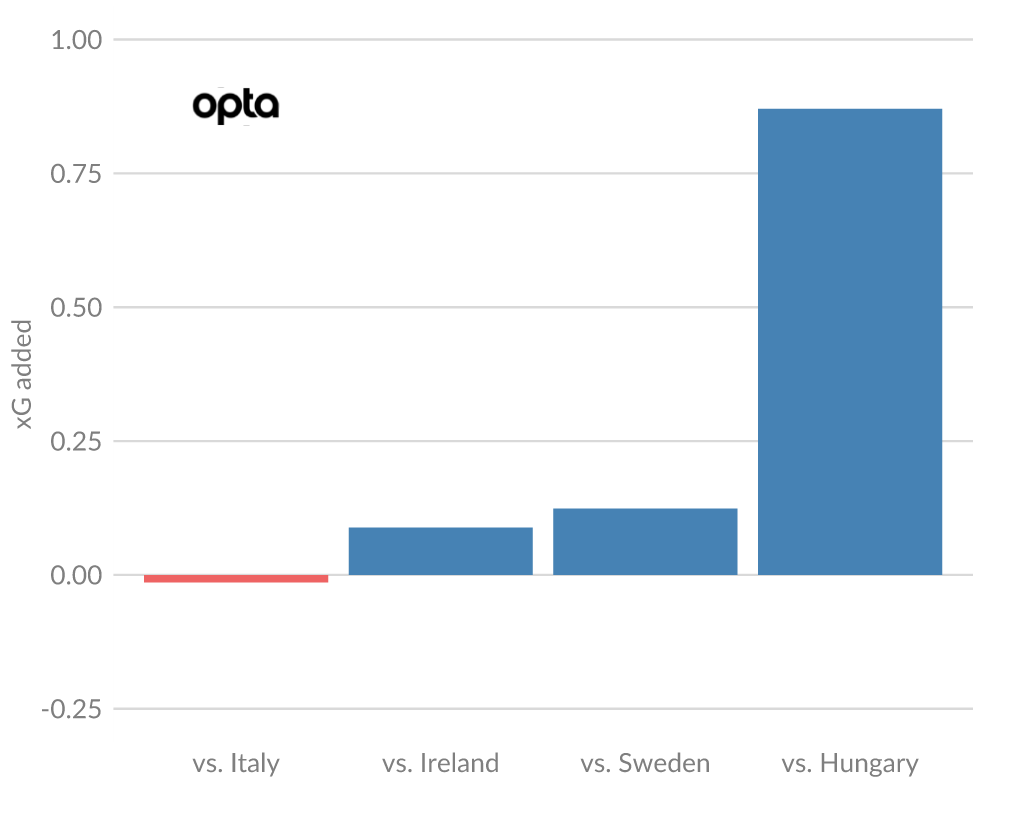 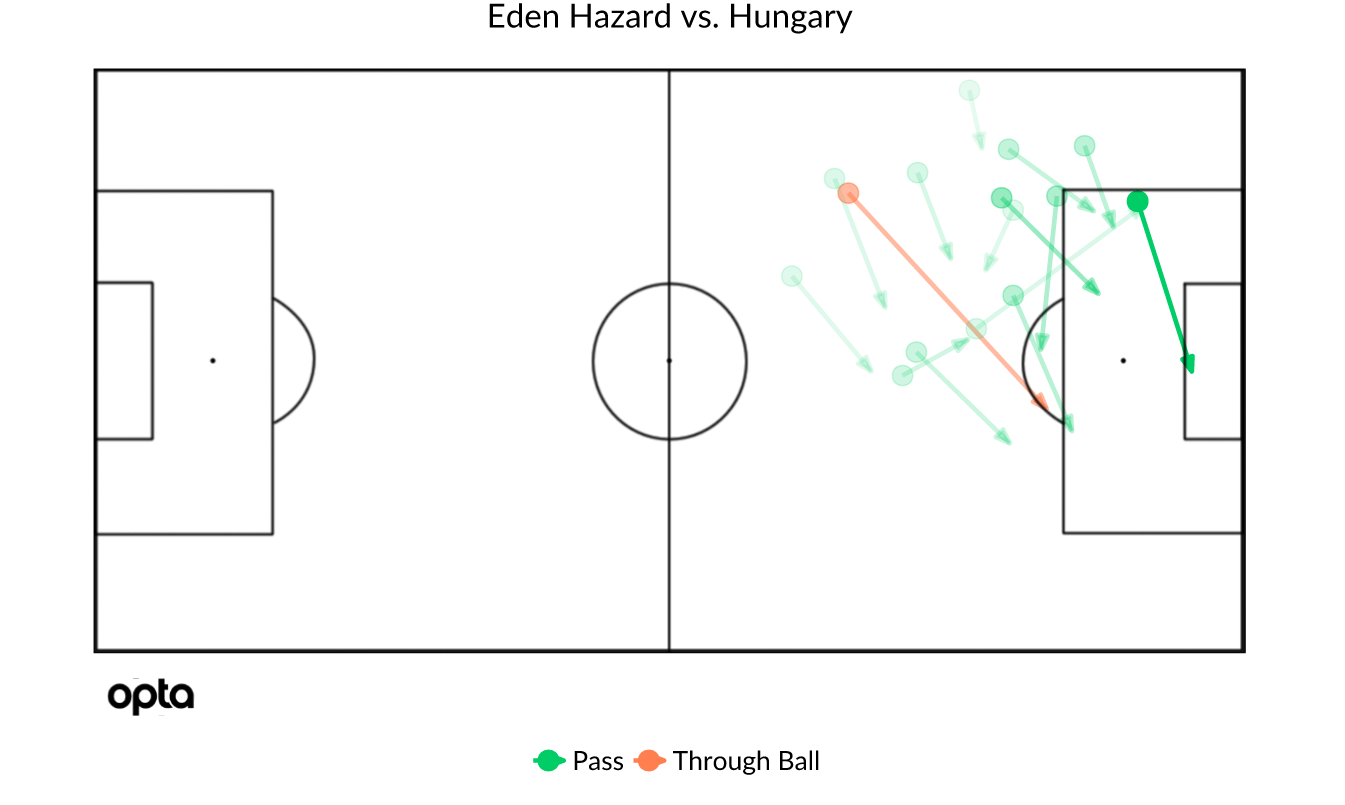 Hazard mainly specializes in short ground passes, whereas he avoids crosses in general. This tournament as well as at Chelsea he only delivers 0.3 crosses a game, which is very low for a winger in an elite team. His passes are often over short distances but also in very deep positions and in the general direction of the goal. These passes are often against packed defences which makes in even more impressive he still finds space to give these passes. One of his best passes against Hungary was this through ball to Carrasco.

It’s a shame he wasn’t able to take his team past Wales, but Chelsea fans will be delighted to see Hazard on top of his game. If he can keep up his form, I’m sure we will see the Eden Hazard who won player of the season in 2015.